Sleet continues to be the dominate precipitation type here locally while areas to the south are experiencing freezing rain. 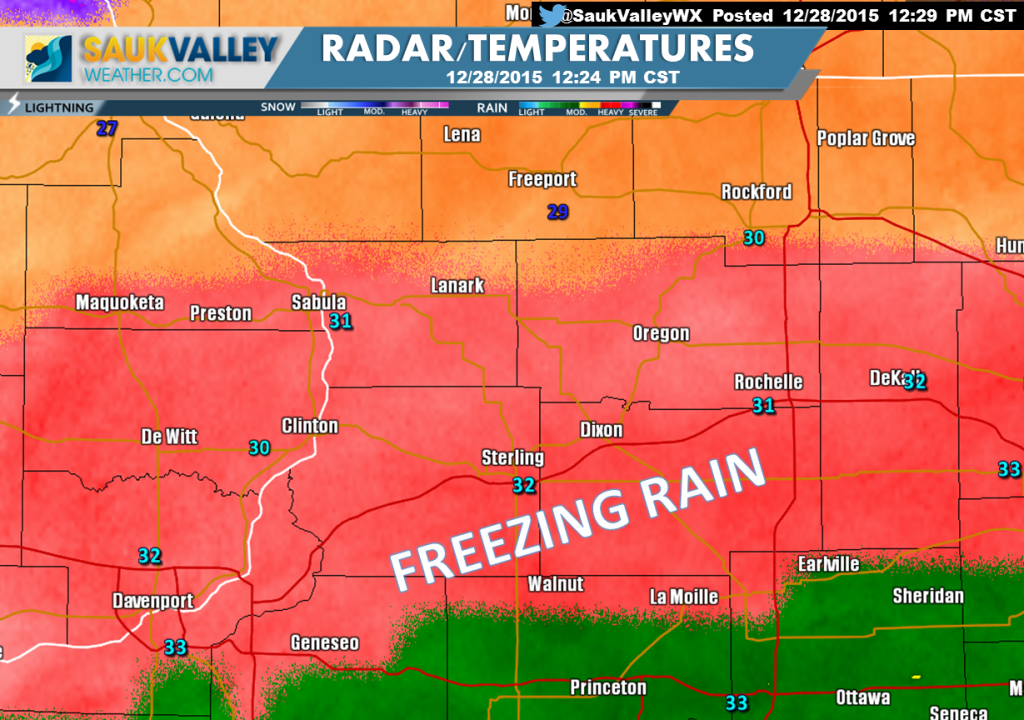 Latest regional radar snapshot shows that an area of rain/freezing rain is slowly started to transition northward towards the area. Expect sleet to continue with a gradual transition to freezing rain/rain as we go through the early afternoon hours.

Winds have increased and will continue to do so. Within the last hour a measured wind gust over 50 MPH occurred at the airport in Clinton. Strong winds will continue through the afternoon and these winds combined with the freezing rain may lead to widespread power outages.

Road conditions remain spotty with I-88 running from Sterling to Moline 50% ice and snow covered.

If you have to travel this afternoon leave plenty of time to get to your destination.

Heavy areas of sleet and freezing rain will continue over the next several hours as copious amounts of moisture continue moving up into the area from the south. Surface temperatures are currently hovering at freezing in many locations allowing any rain to freeze to elevated surfaces. Winds are also beginning to increase as well out of the northeast and will continue doing so over the next several hours. Expect ice accumulations of a quarter of an inch or more as we go through the late morning and early afternoon hours. Avoid traveling if possible.

Here is a radar screenshot at 8am. The orange shading indicates likely areas of sleet while the fuchsia indicates areas of freezing rain with blue/purple being snow. These classification areas are not always 100% accurate but it gives a broad picture of what precipitation type may be falling in the general vicinity. 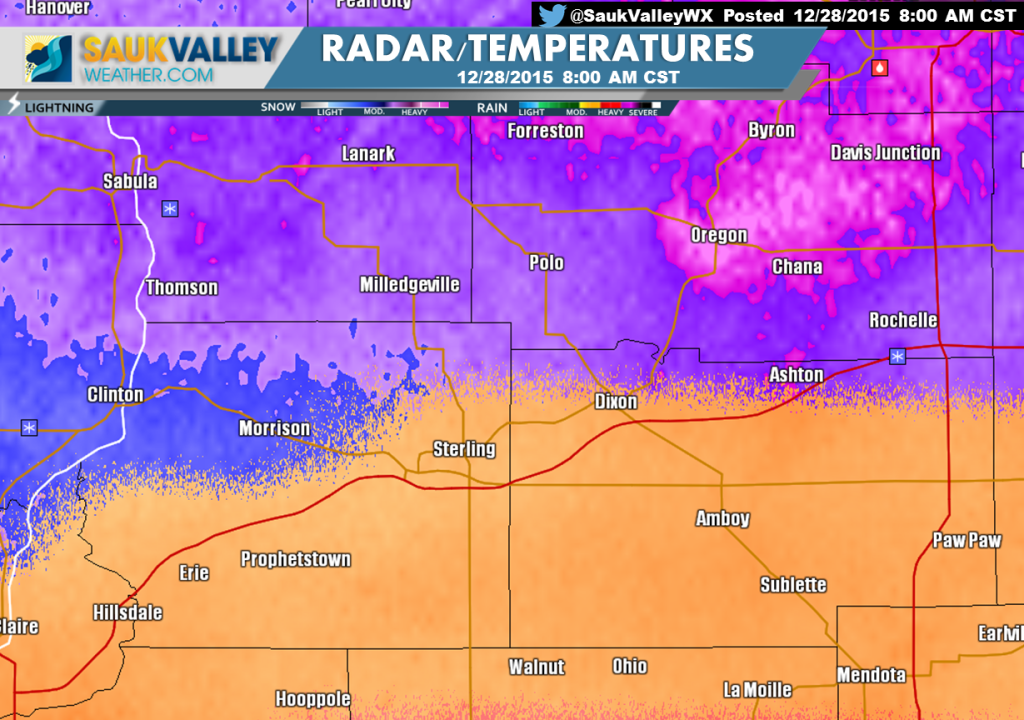 The National Weather Service has now upgrade the winter storm watch to a Winter Storm WARNING effective 6am Monday through 6am Tuesday with the expectation that significant ice accumulations are possible through the day tomorrow.

Areas most likely to experience ice accumulation will be near interstate 80 and points to the north though some ice may still be found south of this line.

Precipitation is still expected to begin before sunrise Monday as a mixture of sleet and freezing rain. This mixture will continue throughout the day with ice accumulations up to a quarter of an inch possible. The precipitation will also be heavy at times as a lot of moisture will be involved with this storm system.

Winds are expected to increase during the morning hours which will add strain to any power lines or tree branches that are coated with ice leading to power outages. Travel will also become difficult on area roadways.

A mix of rain and freezing rain will continue during the afternoon before a period of light snow is possible by late Monday evening. Accumulations are expected to remain light here locally with perhaps an inch or two of accumulation but the heaviest snow will continue to stay to the north and west of the area.

A Winter Storm WATCH still remains in place for the entire Sauk Valley area for Monday. The NWS will likely narrow down headlines to a specific threat by later this afternoon as a strong winter storm system is still on track to bring significant impacts to the area.

The main threat with this storm continues to be high probabilities of freezing rain as temperatures at the surface will be near or slightly below freezing while just above the surface temperatures will be above freezing.

Precipitation will begin during the pre-dawn hours of Monday with sleet and freezing rain likely. Some snow may mix in a times as well but a transition to more sleet/freezing rain is expected by morning. Sleet/freezing rain will continue for much of the morning and early afternoon hours along with winds gusting over 30 MPH at times. It is the combination of ice accumulation and strong winds that poses the greatest hazard as any ice accumulation on trees/power lines will add significant weight to those structures and may cause significant damage to power systems. 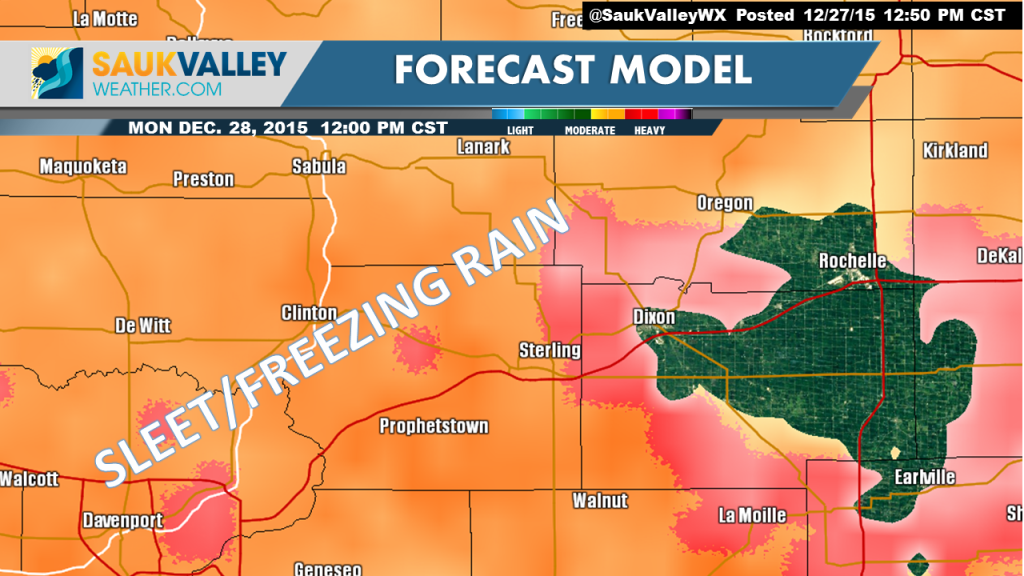 Ice accumulations up to a quarter of an inch or more are possible with this system depending on the duration of the freezing rain.

Bottom Line remains that the probability for a high impact winter storm consisting of ice remains quite high for the area late tonight through much of the day on Monday. Travel is expected to become hazardous by Monday morning with conditions likely deteriorating further as the day progresses. Some light snow accumulations are possible late Monday night but at this time the heaviest snow will remain well to the west of the Mississippi river over parts of Central and Eastern Iowa.

A Winter Storm Watch has been put out by the NWS that covers the entire Sauk Valley area from early Monday morning through late Monday night. This is in anticipation of a significant winter storm expected to take shape and move through the region beginning late Sunday night through much of the day on Monday.

The current track of the system will put our area specifically in a favorable location to receive a prolonged period of freezing rain by Monday morning. Large amounts of moisture will be in place for this system to work with so heavy rainfall is also a possibility with some locations receiving up to an inch or more of rainfall likely before the storm is over.

Back to the ice threat, Monday morning temperatures aloft are forecast to be warmer while the surface temperatures will remain near or slightly below freezing. This scenario sets up a period of freezing rain very early Monday morning through the early afternoon hours. If temperatures can remain at or below freezing here at the surface for much of the morning then ice accumulations will remain possible with some areas receiving up to a quarter of an inch of ice accumulation. The ice threat will diminish as you approach the Chicago area and points south of interstate 80 on the Illinois side where temperatures are expected to remain warm enough for all of the precipitation to remain liquid.

Strong winds will develop ahead of the area of low pressure as it progresses northeastward into far eastern Iowa/northwest Illinois by the early afternoon hours with gusts near or over 40 MPH likely. This will create substantial stress on trees and power lines that are ice-coated and may result in significant power outages in the area.

Significant snowfall is expected to stay to the northwest of the area however towns further north closer to the Wisconsin border may receive a few inches of snowfall before the storm system departs on Tuesday. Much colder air will follow behind and temperatures will remain in the teens, 20s and 30s for the remainder of the week.

Bottom line: The main threat with the system remains freezing rain with ice accumulation coupled with strong winds that will create hazardous travel conditions beginning Monday morning and lasting through much of the day. The precipitation may change over to rain at times before changing to snow by late Monday evening. Light accumulations are possible here locally but the heavy snowfall will remain well to the west in parts of Iowa. This storm is still 24 hours away so changes in track may still occur. More updates throughout the day on Sunday.