Our July this year brought typical summertime heat and humidity but what it also brought was copious amounts of rainfall thanks to an active “Ring of Fire” pattern that was well established over much of the country. This type of pattern is very conductive to heavy rain producing thunderstorm clusters that can often times move over the same locations (sometimes even multiple times per day!) causing extreme rainfall rates and impressive rainfall totals.

Many rain gauges within our region picked up over 8 inches of rainfall for the month of July with some cities coming in higher than that!

Our weather station in Sterling picked up around 8.59″ while our secondary station at Distinctive Gardens picked up 7.87″, both for the entire month of July respectively. A Cooperative Weather Observer with the NWS in Chicago out of Amboy picked up an impressive 9.23″ for the month.

The typical setup for an active “Ring of Fire” pattern for our area is illustrated below. Intense heat resides in the central part of the county and its on the periphery of that heat where active storm clusters will travel.

We picked up over an inch of rainfall in Sterling each day for three days in a row during the most active time of this pattern. Those days were:

This pattern also carries enormous amounts of moisture northward into the area not only from the Gulf of Mexico but also from the monsoon in the desert southwest. Add on top of that our maturing corn crop which is also adding moisture to the air and you get a recipe for heavy rainfall.

Likely due to all of the rain and moisture, our mean temperature for the month ended up slightly on the cooler side of the spectrum. Our hottest day was 92 degrees on July 19th. 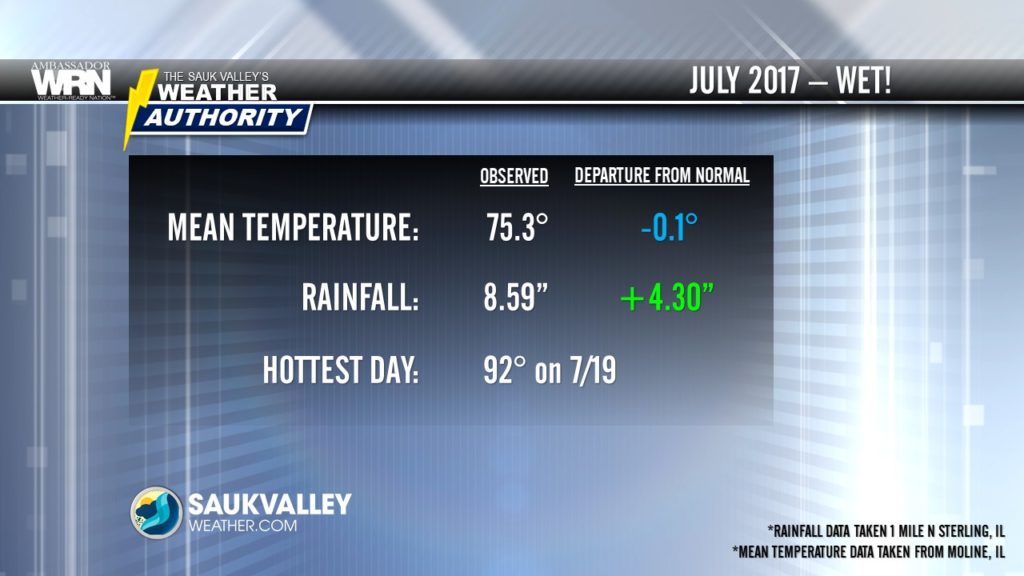 The outlook for the next couple of weeks continues below to much below average temperatures as we remain under a northwest flow pattern aloft. We can get occasional rain chances during this pattern but overall it favors cooler weather and mostly dry conditions. There are signs this pattern will flip to the warmer side as we near the end of August and even longer range signals that our upcoming fall season will likely yield warmer than normal temperatures.