It’s a warm and muggy summer evening, lightning flashes in the distance as a complex of thunderstorms races eastward through Iowa heading right towards the Sauk Valley. You pull up the latest radar loop on your phone thinking, “Wow, that’s one impressive storm complex! Looks like we are in for quite the soaking!” An hour passes by and as the storms near the Mississippi river, a sudden weakening trend appears in the newer radar scans. “NOT AGAIN!”

It seems like a common occurrence especially either early in the morning or late at night. So what gives? Is the Mississippi River really affecting thunderstorm complexes that try to move into northern Illinois?

The simple answer is, NO. Here’s why: 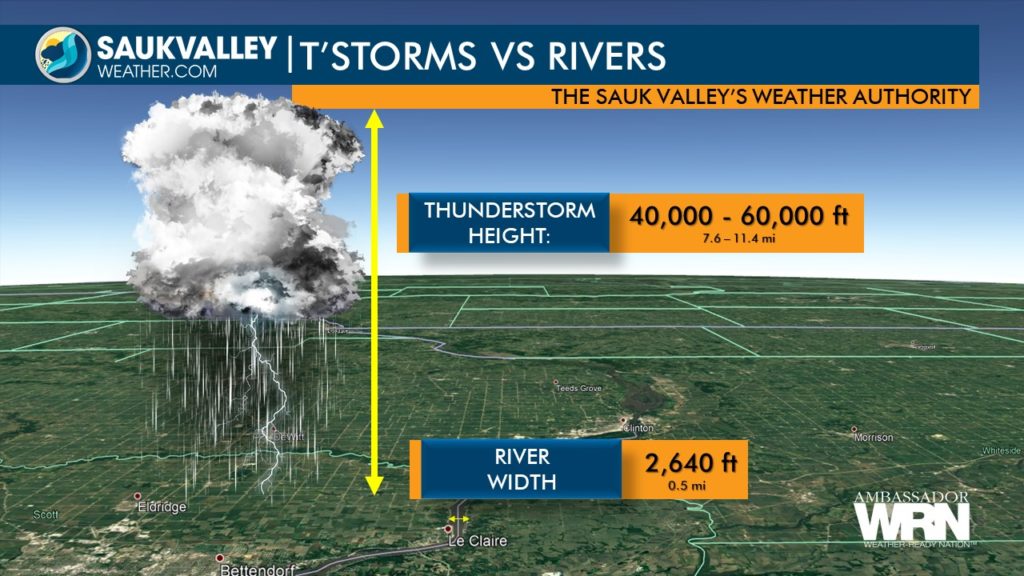 Thunderstorms can extend several miles into the atmosphere and when we compare the scale of these two features it’s easy to see why the river really doesn’t have much of an impact. The river typically spans a width under a mile, usually around a half a mile compared to the nearly 7 to 11-mile span a thunderstorm occupies vertically in our atmosphere. That’s a big difference in real estate!

We also have to take into account that the river basin itself is situated even further away from the storm because of its location in a valley compared to higher elevations that surround the river. Years of data have proven that river basins don’t have a truly meaningful impact on thunderstorm complexes.

So if the river isn’t affecting storm complexes, what is?

Well, in our case here in the Sauk Valley, a number of things.