After what seemed like a spring or summer day yesterday with temperatures topping out at 57 degrees at the Whiteside county airport, we’ll be needing a jacket for the next couple of days before we crank up the temperature again.

A few of our midday and afternoon thunderstorms across the area and neighboring counties experienced some hail in yesterday’s storms. Hail reports were common in the stronger storms. Hail size averaged around 0.25″, but some few areas experienced larger hail upwards to an inch in diameter.

With yesterday’s system come and gone, we’ll have a slight chance for snow this morning. Any snowfall won’t amount to any significant accumulation, and will likely end by the mid morning hours. Cloudy conditions along with very strong northwest winds are expected today. Winds will be around 18MPH with gusts as high as 30MPH. Not as warm as yesterday with highs today expected around 34 degrees. We’ll feel much cooler though with the wind out of the northwest where it may feel 7 to 10 degrees cooler with the wind chill.

Sunshine is right around the clock, as Wednesday favors partly sunny skies. Temperatures won’t be much different as we go through Wednesday. We’ll keep with low to mid 30s and cool air in place through much of the day as well. By Thursday we’ll crank up some of that heat as things begin to change again for the better. Highs in the lower 40s and plenty of sunshine returns to the Sauk Valley area as winds will shift overnight Wednesday allowing for southerly winds Thursday. Even more warmth expected on Friday with more sunshine. This will be the last day before we fall back into cooler temperatures for the weekend. 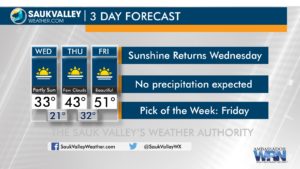 Don’t forget! The Blue-blood Supermoon is upon us. Next Wednesday if you wake up a little early you can witness the lunar eclipse, as well as the supermoon. The moon will also show a tint of red due to the shadows being cast on the moon during the lunar eclipse. We’ll have a better forecast regarding clouds, temperatures, and whether or not we’ll be clear enough to enjoy it by this weekend.