Another beautiful day is expected across the Sauk Valley region today. Highs reaching around 84 and mostly sunny conditions. A chance for showers and thunderstorms are in the forecast for this early afternoon through early evening. The system that may affect us is currently moving through the western portion of Iowa and slowly making its way here. A soft southeast wind will be present today, leaving today to be a fantastic day rain or shine.

Tonight we can expect conditions to dry off after sunset, with lows around 70. A slight chance for a shower or two in the predawn hours of Thursday will be possible as well.

Now let’s get down to our June 22nd 2017 outlook. You may recall our previous two years have had tornado threats, luckily this year we’ll likely take a break from that threat. We do however have a chance for severe weather that could impact the Sauk Valley region. The SPC has us under a slight risk for scattered severe thunderstorm chances on Thursday.

So let’s get into some details about Thursday. First off, timing is going to be completely different this time around. Instead of threats showing up in the afternoon & evening hours, most of us will likely be sleeping as this system will move in after midnight. Secondly, this system won’t be favoring supercell development like the previous two years, instead it appears to favor multi-cellular thunderstorms likely forming a line.

There’s no question that we’ll likely hear some rumbles and some heavy rain Thursday into Friday morning. I’ll briefly break down the system, but again we’re not going to talk about tornadoes.

So our dew points through much of the day will be in the upper 60s and lower 70s. A decent amount of moisture will be present allowing muggy conditions to set in.

Thankfully though our CAPE values are not screaming off the charts like they were the last two years, which will limit our thunderstorm activity and strength. CAPE values will range from 1500-2500J/kg in a narrow plume ahead of the cold front. The below graphic displays pretty colors, but the light greens are ranging between 2000-2200, and anything blue or purple is lower than 2000.

Finally, below is a simulated graphic for those who enjoy seeing what it may look like at the time it all unfolds and enters the area. The timing is not accurate, as it is still a day out. But this model (NAMNEST) suggests 06Zulu time which would be 1AM central time.

Now, I’m not a large fan of displaying simulated radar as it usually never ends up looking like this. However, as a line of thunderstorms ahead of a cold front advances we can expect threats for damaging winds and heavy rainfall. Also, this is just one model – NAMNEST – other models will vary, and show different numbers, simulations, and other equations. I’ll favor the NAMNEST on this system for this run, as it does run on the ‘higher’ end of the spectrum.

Now, Monday was a little concerning when looking at June 22nd. Thankfully, it has shifted northward into Wisconsin, where now the threats for flooding seems more and more possible. I never show the Weather Prediction Centers graphics unless its the day before, as that is likely the case of what will happen. However, Monday favored us in the bullseye for heavy rainfall which could have led to flash floods. Again, this has shifted northward into south central Wisconsin.

This is something we usually don’t see this time of year, as this is more of an August setup. A frontal boundary appears to stall out over south central Wisconsin which will allow for ‘training’ thunderstorms to develop through the afternoon and continue through the overnight hours. In turn, this may allow for areas of flash flooding, and possible flooding hazards in areas. Our GFS model (pictured below) indicates that boundary to our north, where heavy rainfall may occur. This would also bring threats for hail, damaging winds, and a few possible tornadoes. 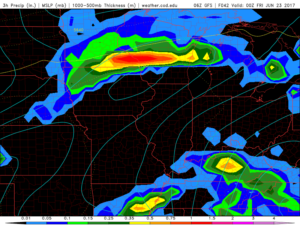 Now the reason I show this is because on Monday this heavy band was right over our area. As time unfolds we’ll have a better understanding on where this boundary will likely stall, and that will be the cause of concern no matter who it will affect.

So at this time, our threats will be overnight and mainly damaging winds. More updates to follow as needed.