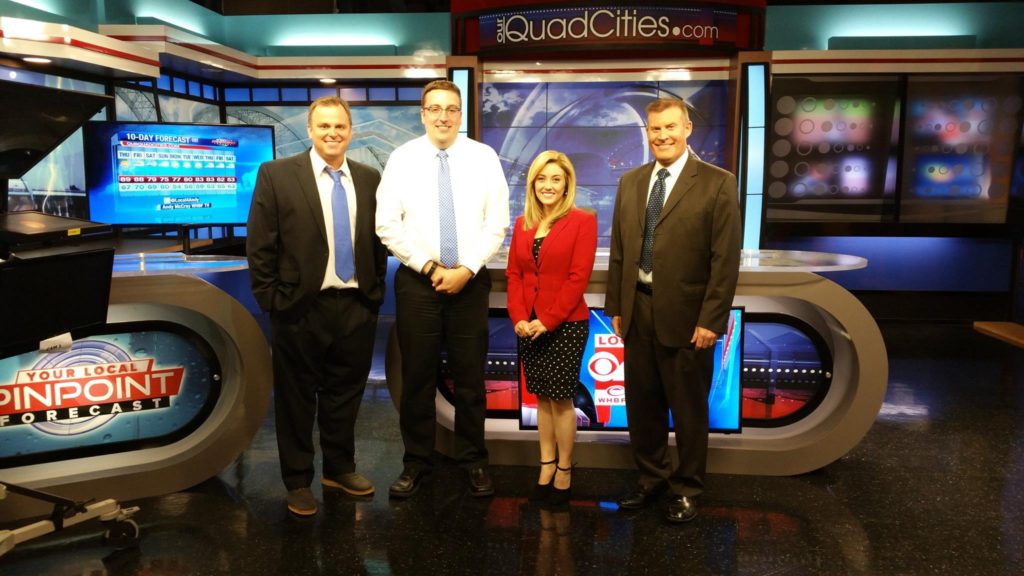 This past summer I had the extreme privilege of interning with our local CBS affiliate in Rock Island (WHBF Local 4). When I first entered college and was advised that an internship was key to being successful after graduation. Immediate images of coffee runs and doughnuts entered my mind. I remembered seeing the roles of interns on television programs; the errand runners, doers of work that was considered inconvenient but necessary for the place to function. Needless to say I’m happy that those TV depictions didn’t turn out to be true in my case, though I think anyone in their first real-world job experience would probably do anything to impress the boss.

Late last fall I began my endeavor by reaching out to several local TV stations. Most do not display prominently whether they take on interns or not. From my experience only a handful accept an intern in the weather department. Internships in the news department however are more plentiful. Several months go by and no luck. Then, when all my hope seemed to dwindle, and the Spring semester was only a few weeks away from ending, I get an e-mail with an opportunity! Yes! Finally! Andy McCray, Chief Meteorologist for Local 4 WHBF agreed to put up with me for the summer.

I’ve been to TV stations before so I wasn’t a total stranger to the situation, however that was several years ago and now there is more technology including very sharp high definition equipment. Quite the change from my last experience.

My first week began in June and this is where the magic began. Learning the ropes of a computer system that I had never touched or even seen before, learning the ins and outs of putting together a broadcast weather presentation, seeing how different elements fit into the actual newscast, of which the station did at least four of just during the afternoon alone. Whew!

There is a lot of thought that goes behind what you see on TV each day. We checked the community calendar quite frequently in order to highlight how the day’s weather would impact popular outdoor events. It isn’t as simple as just copying down a forecast. One must carefully piece together a weather story making sure each element flows with the next. It was quite a process!

Not only was I fortunate enough to work with such an experienced meteorologist like Andy, but I also had the opportunity to work alongside the weekend meteorologist, Ashe Simpson, who gave me some very helpful insights as this was his first TV job out of college. A lot of invaluable advice that I’ll carry with me!

Now that August has come and is nearly gone it was time to say goodbye. I’ve learned and grown so much personally over these last three months. I’ll be forever grateful to the fine folks at Local 4 for the experience I’ve had and I look forward to new opportunities in the near future.

Have an idea or question for next month’s article? E-mail me! [email protected]