Back in June I had the opportunity to storm chase with Tim Bejster on the 22nd where I witnessed one of the most incredible displays of near constant cloud to ground lightning. So for this month’s article it served as a reminder that there are different types of lightning that we see around our area.
We’re familiar with the cloud to cloud lightning (often referred to erroneously as heat lightning during the summer months) and the deadlier cloud to ground lightning, but within the second category lies two additional types of lightning: positive and negative.
Negative lightning strikes are the most common accounting for nearly 90% of all lightning strikes, while positive are rarer usually making up 10% or less of all lightning strikes. What’s the big deal here?

While negative lightning is more common, it is also considered somewhat less deadly and damaging when compared to a positive lightning strike. Negative strikes often occur within the parent thunderstorm and a charged bolt carries around 300,000,000 volts / 30,000 amps of power. The illustration explains in more detail how this process works.
Positive lightning strikes, while more rare, are more dangerous and deadly due to their tremendous increase in power and reach. These type of strikes often times reach “outside” of the thunderstorm itself and can strike up to 30 miles away from the parent thunderstorm. For this reason it is very important to take shelter when you hear thunder from an approaching thunderstorm. 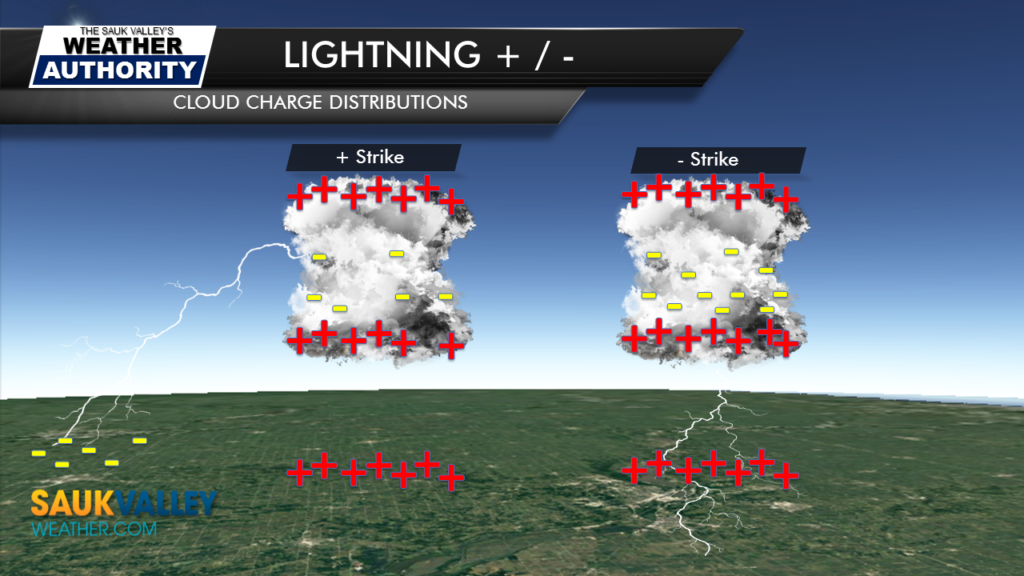 A typical positively charged lightning strike carries in upwards of a 1 billion volts and over 300,000 amps of power. Typical household light bulbs carry about 120 volts and 12 Amps. When you do the math, that’s enough power to illuminate over 25,000 light bulbs. Quite significant! The other deadly aspect of positive strikes involves their duration. Typically, they last up to 10 times longer than negative strikes, causing more damage to humans, trees, power grids, and any other structure that has been struck. Often times positive strikes are followed by a tremendously loud explosive amount of thunder as well, so if one strikes near you you’ll know it fairly quickly!