I wanted to write briefly on the subject of astronomical events for the remainder of March as we do have some rare events happening before the month is over. For those of us who do enjoy constellations, planets, and our galaxy this will pertain to you and this will not be weather related.

Over the last few weeks we have been watching the constellation Orion continue to shift and turn towards our southwestern sky. Originally we know it is our most famous northern constellation that is part of the Orion nebula (M42), De Mairan’s Nebula (Emission) [M43], and the Emission M78.

Pictured below will show the southwest shift of Orion tonight.

March 18th through the 20th

The returning young moon along with the planets Mercury and Venus will be seen briefly right after sunset. The moon will be quite feint at this stage, but it will be present. Due to the spring equinox, we are allowed to see the moon in this very young stage, along with these two planets near the sunset. Venus should be easily seen in the west March 18th through 20th. If you don’t spot Mercury right away, use your binoculars at Venus and you should see Mercury, as they have been in a single binocular field all month. You shouldn’t need binoculars to see both planets shining once spotted. 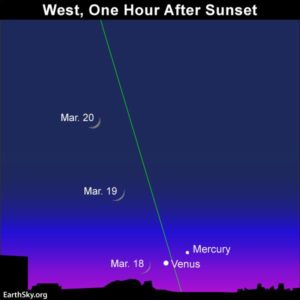 March 20th is the March Equinox at 11:15AM CDT. The March equinox signals spring in the Northern Hemisphere and autumn in the Southern Hemisphere. On this day, the sun rises due east and sets due west.

Arcturus will climb highest up for the night a few hours after midnight local time and will beam high in the western sky at dawn. Arcturus is the 4th brightest star in the night sky. Follow the Big Dipper and “arc” towards Arcturus.

This marks the 2nd and final Blue Moon of the year. Remember, a Blue Moon is not really blue in color, it just means it is the second of two full moons in one month. Remembering that January had two full moons, this month is also hosting two full moons. Seeing two Blue Moons in one calendar year is quite rare, the last time was in 1999 and we won’t see it again until 2037. Why? February is the only calendar month that can go without a full moon. Prior to 2018, we last had a February with no full moon 19 years ago, in 1999. And – as you might expect – we also had two Blue Moons in 1999, on January 31 and March 31. Nineteen years from now – in the year 2037 – February again will have no full moon, and the months of January and March will each feature two full moons [source: Earthsky.org].

That wraps it up for March. I’ll bring out another month or half month outlook for April in a week or so. Happy gazing & clear skies.