The Storm Prediction Center in Normam, OK has now included Whiteside county in the slight risk category for severe thunderstorm threats for our early afternoon. Storms will begin to develop ahead of a cold front boundary in place to our west after the noon hour. Models suggest isolated and scattered showers/thunderstorms to enter into Whiteside county by 1-2PM and Lee county by 2-3PM. Forecast model 15Z HRRR supports storm development in that time frame as depicted below.

At the surface, current observations (11:30AM) at the Rockfalls Airport indicates 68 degrees with 57 dew points and a southwesterly flowing wind. Current models indicate dew points reaching low 60s by 3PM across portions of Whiteside & Lee county, which will be sufficient for storm development. A concern though arises on whether or not 60 dew points will be met before storms enter the area. Therefor a conditional threat for strong to severe storms will likely remain in place for western Whiteside County. 15Z HRRR Model depicts the sporadic spread of the dew points (60s are shown in blue coloration).

With that, low values of CAPE (or convective energy needed to create a thunderstorm) will likely be present due to insufficient heating across the Sauk Valley. CAPE values across the Sauk Valley and much of northwest Illinois at 11:30AM remains below 1000J/kg. Due to cloud coverage across the area this morning, along with morning convection, CAPE will be limited to higher numbers. Typically for a highly unstable atmosphere, CAPE values should range above 2500J/kg, which would allow for severe thunderstorms with strong updrafts. However, CAPE values can be above 1000J/kg and still allow for thunderstorm development. At this time, 15z HRRR model suggests low values below 1500J/kg across the area, which again will allow for not as strong/potent thunderstorm development/continuation across the area. Therefor, another conditional risk for severe weather is present. Below depicts CAPE values where blues are usually 1600J/kg and lower, and teals are higher with greens depicting 2000J/kg and higher.

Current visible satellite shows a cumulus field along with developing thunderstorms in the QCA and eastern Iowa area. With that, continuation of cloud coverage across the Sauk Valley area exists allowing our atmosphere to destabilize slowly, rather than rapidly like that across areas of western Illinois & central Illinois. An area in Northern Illinois where CAPE values are higher are east of I-39 across Dekalb, Kane, and Kendall counties where SBCAPE values already exceed 1000J/kg and will continue to rise.

A severe thunderstorm watch will likely be warranted for the area. I expect Lee county at least to be included in a watch mainly for eastern portions of the county at this time. This will be due to backed surface winds as well as steep lapse rates which could bring a supercell in the watch area. With that, threats in strong thunderstorms will likely be that of large hail in early development stage before converting to a primary wind threat. Tornado threat will remain quite low, but a brief spinup won’t be ruled out especially further east.

Timing again on storms will be between 12:30PM-4PM and after 4PM things should quiet down in terms of severe chances. We are working with limited ingredients across Whiteside and western Lee county, but that does not mean a severe thunderstorm can’t happen. A conditional risk will remain in effect for the Sauk Valley. 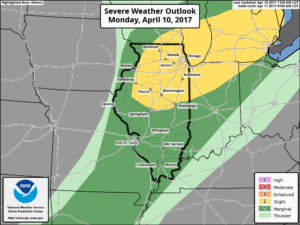