A strong early-spring storm system is on track to impact the Sauk Valley to start the upcoming weekend bringing a variety of weather including a significant threat for severe storms.

For today we’ll see a few rounds of scattered showers this morning followed by more scattered showers and a couple of thunderstorms later this afternoon and through the overnight hours. This activity will be in response to increased lift and more moisture streaming into the area. Later tonight, especially after midnight, a few of the thunderstorms may briefly approach severe levels with large hail being the primary threat. Frequent lightning and locally heavy rainfall will also be likely. 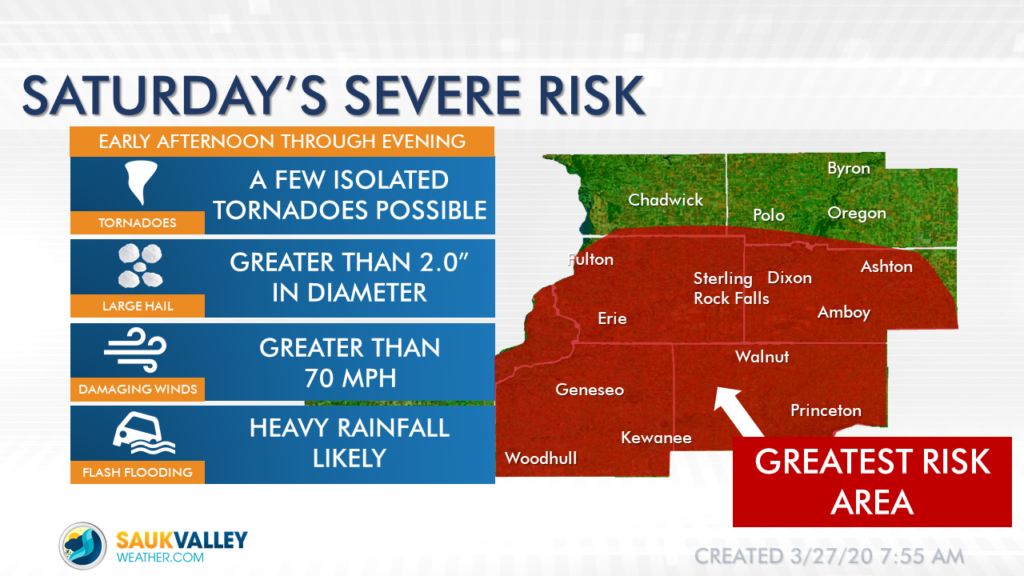 Saturday morning, showers and a few thunderstorms will be ongoing before coming to an end around noon. Some clearing working in from the west and strong south wind in advance of an area of low pressure passing through northwest Iowa will drive a very moist and unstable air mass up across the Sauk Valley region. This air mass combined with an approaching warm front in the late morning and early afternoon may spark an early-round of strong to severe thunderstorms capable of all hazards including an isolated tornado and large hail. Damaging winds will also be possible along with locally heavy rainfall. The time frame appears to be from 11am until 3pm.

Later in the afternoon, beyond 3pm, the cold front/dry line will begin advancing eastward and develop another round of strong to severe thunderstorms that will initially form in extreme eastern Iowa before racing eastward at up to 50 MPH. These storms will also be capable of damaging winds, large hail, and perhaps an isolated tornado.

As it stands right now, there are two main windows of time to keep an eye on for strong storm development. One in the late morning and early afternoon followed by another short period in the late afternoon.

Behind this storm system, very strong winds will move in for Sunday with gusts up to 50 MPH possible at times.

BOTTOM LINE: We’ll continue to watch ingredients as they come together for late Saturday morning and then again in the afternoon. Should strong to severe storms develop, you’ll want to have a plan in place to seek shelter quickly given the fast storm movement which could exceed 50 MPH at times.

We will have more updates throughout the next 24 hours as more data becomes available.