Hopefully by now everyone has heard of the potential severe weather threats that may likely affect the area Wednesday. Models continue to bring forward a potential severe weather outbreak day across northern Illinois. Interestingly, this is the one year anniversary (6/22/15) of a significant supercell which caused damage to the Sterling mall, and then multiple tornadoes as it progressed east-southeast through the state. You may recall the tornadoes at Woodhaven and also the EF3 at Coal City to name a couple. With that, models are showing a typical setup for this time of year.

We begin by looking at the setup and what is the main cause of concern.

First a surface low (located west of the state) will strengthen and move eastward in the afternoon hours. In return, as the surface low moves east the warm front will move with it. Typically, the area south of the warm front is where storms will redevelop, as in this case the atmosphere south of the front will likely be unstable. To back that up, temperatures will be in the 90s.

The graphic below shows the dew points in the mid to upper 70s which also supports an unstable atmosphere.

While these are standard dew points in the summer, strong winds aloft are typically needed to allow severe weather to develop. We then look at the vertical wind shear (change in wind speed/direction with a change in altitude ) to determine whether or not the winds will support severe thunderstorm development. For June, our jet stream is showing a decent amount of energy to support development.

This graphic depicts wind speeds and direction at 500mb (about 18000 ft) Wednesday evening.

This graphic also depicts wind speeds and direction but at the 850mb (about 5,000 ft). Notice the change in direction as well. This helps support severe thunderstorms as well as causing a ‘spin’ in the winds aloft.

With these three combinations (Temperature, Dew Points, and Shear), models have been showing severe weather numbers pretty high for many model runs. This was somewhat similar to that of last year in terms of data spread across the models. Finally we look at another colorful map – EHI (Energy Helicity Index). This map basically describes the speed shear (how much wind speed increases with height) & directional shear (how much wind speed changes direction with height). Or, simply put – how much spinning the air is doing in the winds aloft. The stronger these components are, the higher the helicity. So this map will describe Helicity as well as the CAPE. CAPE is just a term for how much energy is available. The bluish-grey blobs are areas of high EHI. Do note though, tornadoes are still possible even in a lower EHI when the CAPE or shear is large and purple areas can bring a tornado as well. 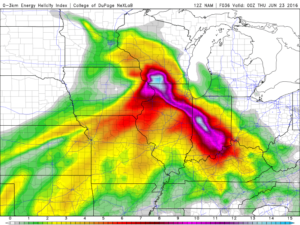 Many other people like using the Significant Tornado Parameter map, but I find people solely use that map and never look at the real guts of the system (which we have just done). Otherwise, STP map shows some high numbers. However, we may have interesting maps/models/colors and all that neat looking stuff, but if storms struggle to develop, nothing matters. But models do tell a story.

So what may happen?

Currently, models bring out a typical June system of two storms. We will likely be hit by showers and thunderstorms early in the morning, likely before sunrise we can start seeing the early showers and thunderstorms. These will progress through the morning hours. Some of these storms may be strong and possibly severe. Tornado threat remains low in these early storms, leaving mainly a damaging wind threat.

This map is for 3AM.

As mentioned, these storms will track southeastward towards Chicago. Models have been very consistent showing severe weather threats affecting Chicago for awhile now, while the rest of the area has been changing. That does not mean the Sauk Valley Area is clear of severe weather threats. These storms will pose all hazards especially in their early stage as they move across the region. The biggest threat is damaging winds, but a tornado threat is also possible due to the ‘spin’ the models have been showing. Eventually these storms will turn into a line which will then have a high threat for damaging winds. Also, you note that the 7PM map shows the big blob near Rockford, this could be more south, or a little more north. That will depend on where the warm front really ends up which I discuss in the next section.

Important things that can change the outcome

There are many things that influence how the day will pan out. To name a few though to understand why things may or may not pan out is important.

-The main factor is the early morning storms. Typically, these storms this time of year will determine what will happen in the afternoon. If these storms come in later, or last longer than expected it could lessen the instability allowing storms to be weaker. The best updates always come after morning storms end.

-Another thing in the guts of the models show us that these storms may very likely be very heavy in rain. Due to the dew points, PWAT, and other factors storms may pose additional threats such as flash flooding in areas. SPC hints around with early development and supercells. Likely any supercell that happens may end up being HP Supercells (High Precipitation Supercells). This typically means that if a tornado happens it will likely be rain wrapped and become very dangerous for those unaware or in the path of the storm.

I know a lot of information was just handed over to you (the reader), but I hope you have an idea of how serious this risk could end up being. Assuming everything pans out like models suggest, a very active day is in store for anyone in the risk areas. Whether you are in an enhanced or moderate risk, all modes of severe weather will be possible Wednesday afternoon. These risks include: Damaging winds, large hail, tornadoes, and possibly flash flooding. Be sure to be prepared, have a plan, and in the event of severe weather remember to remain calm. Panic does no one any good. I also suggest having multiple sources for warnings and information during severe weather days. Don’t solely rely on your Facebook connections/Weather pages as Facebook does not always show information as soon as it is published. I also feel there is no need for another update unless something drastically changes. This will be our last update for Tuesday, expect one Wednesday morning either by myself or Andrew.