Showers and thunderstorms are already pushing through the area this morning and will likely bring a round of heavy rainfall and frequent lightning with them.

Attention then turns to this afternoon with an enhanced risk of severe storms over the western portions of the area, with a slight risk over the eastern portions.

A severe thunderstorm complex is expected to develop and organize over eastern Iowa later this afternoon and then push into the local area after 6pm carrying with it the threat for large hail and damaging winds. An isolated tornado or two can’t be ruled out but I believe the higher tornadic threat remains over parts of Iowa.

Here is a simulated radar image showing storm development over parts of eastern Iowa this evening. A linear complex of storms will likely organize and then move into the local area after 6pm bringing with it the threat of damaging winds and large hail. Very heavy rainfall is likely.

Copious amounts of moisture will be available for these storms to work with making them efficient heavy rainfall producers capable of laying down over 1-2″ in less than an hours time likely leading to flash flooding issues.

Today’s tornadic threat is higher to the west of the area where storms will likely initiate. Parameters including wind shear and instability come together just to the immediate west of the area to pose a risk of a few tornadoes.

Given the amount of shear in the area today the threat for damaging wind gusts is higher, near 30% for western portions of the area and 15% east. Wind gusts up to 70 MPH are possible with the more severe storms.

The threat for large hail will be greatest to the west of the area where storms initially form and remain discreet before coming together and organizing into a line segment. 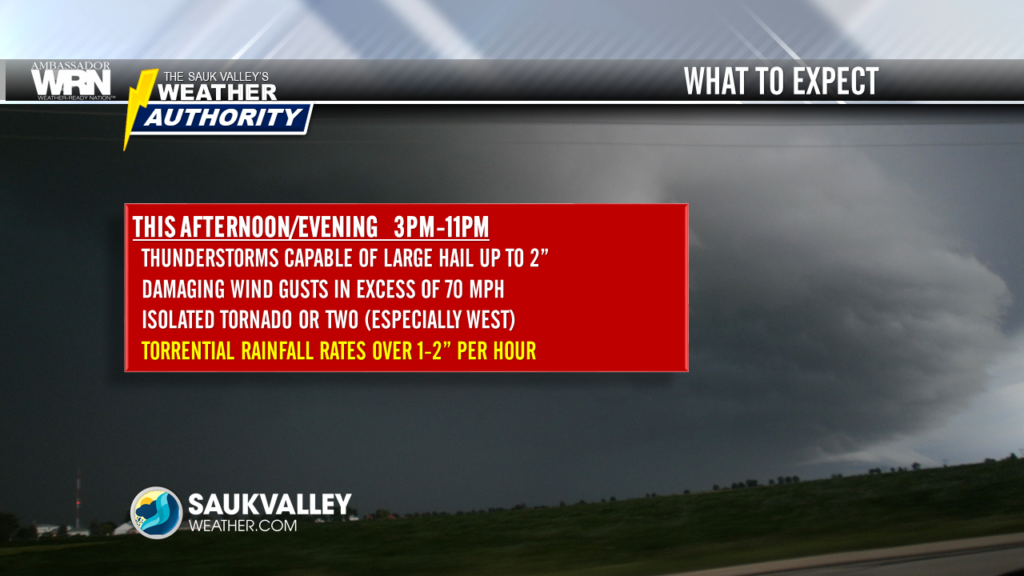 We’ll have further updates throughout the day if warranted. Make sure and stay weather aware.