I recently had a family member approach me on the subject of lightning and how quickly things green up after the first thunderstorm of the spring season. You may have noticed this back in March where it seemed many yards were highlighted with a very saturated green the next day after we experienced our first round of thunderstorms containing good amounts of lightning. There is some really neat science behind this phenomenon, so get ready for a geek moment!

When we look at the composition of our atmosphere, nitrogen stands out as the most abundant element present, accounting for nearly 78% of its composition. Needless to say I don’t think we have to worry about running out of this abundant element anytime soon, however it is really useless to not only to humans, but plants too (at least in its original form). It must be converted into a useable form, such as nitrates, in order to be capable of penetrating the earth’s soil where the roots of many plants exist. Enter lightning, which acts as a “converter” with its major source of heat leading to the creation of these nitrate compounds as they combine with oxygen. Now that we’ve converted our original nitrogen into a new super easy to absorb molecule, the rain will then aid in pushing these nitrates to the soil which will then be absorbed by the plants roots. These molecules act as a fertilizer giving many plants an added boost. The added nitrates are not the only thing that help with this rapid green appearance. The wide distribution of moderate to sometimes heavy rainfall will also help with that rapid green appearance at the beginning of spring.

One final interesting fact about lightning and nitrogen interaction involves the food we eat. This converted nitrogen also makes its way into our food supply, as cows and other food sources feast on the nitrogen enriched plants. Nitrogen actually has its own cycle, like the water cycle, as shown in the accompanying illustration. This is just another example of the complex but yet amazing environment we live in. 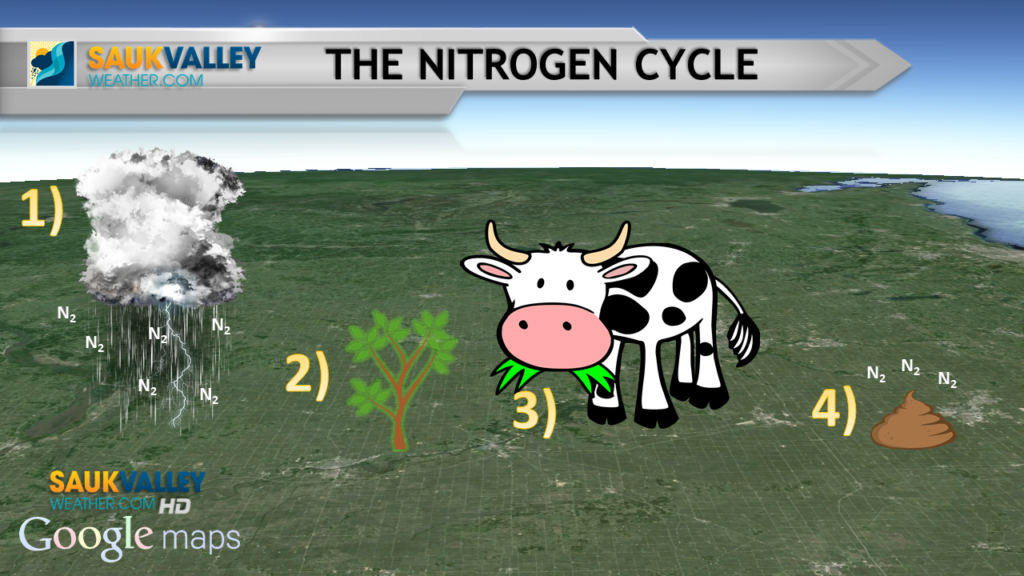