Hopefully most of you still have your hats after the strong wind that moved through yesterday afternoon. Many locations reported gusts over 40 MPH with a 46 MPH reading taken right here at home out at the Whiteside County Airport around 2pm yesterday afternoon. All of this wind is in response to a very tight pressure gradient over the area as a strong area of low pressure over the Great Lakes region battles for ground from an incoming area of high pressure settling into the northern plains. As the low continues to move off to the east this gradient will subside with time allowing for a decrease in the wind gusts beginning later today. 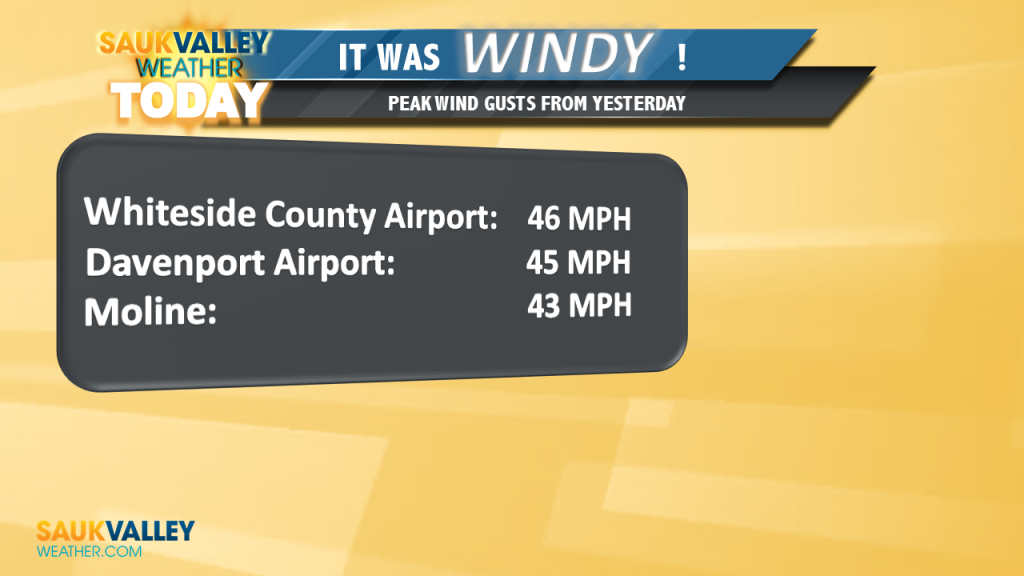 Our temperatures will continue to be on an up and down pattern which is typical for this time of year. Now that the front and associated area of low pressure has departed we’ll be left with cooler temperatures today and some sunshine especially later this morning and early this afternoon. Expect highs today to be in the lower 60s with winds around 20 MPH.

Wednesday will feature a slight warming trend as the next cold front gathers off to the west. We’ll be in the middle 60s for highs with increased amounts of sunshine. The winds will be much lighter as well, around 10-15 MPH. Overall a really nice fall day.

Thursday brings the arrival of the next front, and like its predecessor it too lacks any significant moisture to work with, so at this time the only product will be some cloudiness and perhaps a sprinkle or two. Temperatures will be slightly cooler with all the clouds but still seasonal, in the lower 60s.

After the front moves through Thursday we begin another cool down just in time for the weekend including some frost potential come Friday night as temperatures could drop into the lower 30s for a period of time. If you have any outdoor plants that you would like to hang onto for a while make sure and pay close attention to Friday evening’s temperature forecast as you may want to cover them up or bring them indoors. It will be chilly!