The biggest storm of 2018 arrived later than usual courtesy if a powerful low pressure system that tracked from Kansas through parts of Missouri and eventually central Illinois on Sunday, November 25. Copious amounts of moisture combined with a strengthening low pressure system to produce widespread rains followed by heavy snowfall and blizzard conditions.

Rain began Sunday morning with more than half an inch of accumulation experienced across much of the area. This made it difficult for road crews to prep roads for the impending switch-over to all snow that would occur during the early afternoon.

Once the snow began, it became increasing more intense as the evening approached with road conditions deteriorating rapidly. Several reports of thundersnow were observed from the Iowa City, the Quad Cities, and Sterling/Rock Falls. This phenomenon further enhanced heavy snowfall rates that likely exceeded one to two inches per hour.

Several vehicles were stranded along I-74 in Henry County and I-80 in both Henry and Bureau Counties because of strong winds gusting over 40 MPH.

The heaviest snow fell from the Quad Cities up through parts of western Henry County and into much of Whiteside and Lee Counties where 10 to 13 inch measurements were quite common. This combined with snowfall that we have received earlier this month makes it the snowiest November on record in both the Quad Cities and Rockford. Official records are currently not kept for Sterling, so we compare the two closest observation sites. 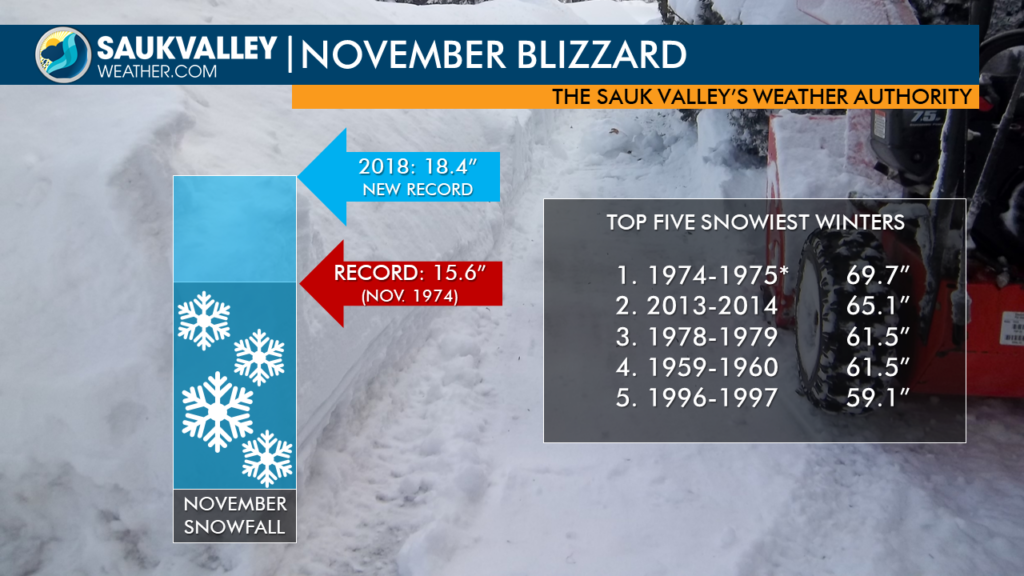 Ironically, the old record was set in 1974. The winter of 1974-1975 would go on to become the snowiest winter on record in the Quad Cities. Other top winter snow seasons include the brutal winter of 1978-1979 when a deadly blizzard struck parts of northern Illinois dropping up to two feet of snow in some places.

The outlook for the rest of November continues to call for above-average precipitation and below-average temperatures.