Hopefully you were able to get outside for a bit over the weekend as we enjoyed another beautiful fall day with plenty of sunshine and highs in the middle 60s. While the winds did increase during the afternoon conditions still were not bad at all considering it is the middle of November already!

We’ve got lots of rain to talk about in the short term as several disturbances move across the region the first beginning Monday afternoon. Clouds will be on the increase late tonight and through much of the day tomorrow with scattered showers developing by mid afternoon. High temperatures will still remain mild through this period as we are under the influence of southerly flow transporting some good amounts of moisture up this way. Rainfall will increase in intensity and coverage by later Monday night and especially during the day on Tuesday when a few thunderstorms will be possible on and off, becoming more likely by Tuesday everning as the rain continues. Windy conditions will also develop by Tuesday with gusts around 30 MPH lasting into Thursday due to another tight pressure gradient laying out over the area.

By Wednesday we’ll have some leftover rain in the morning followed by cloudy skies during the day as the storm system begins to depart off to the east. Will be left with windy conditions as highs reach for the middle 50s.

Once the rain finally does end there could be some impressive totals with most areas receiving 2 inches or more and perhaps even 3 inches not out of the question either.

A big cool-down is still on track for the later half of the week with temperatures only reaching near 40 degrees. We could even see our first flakes of the season by early next weekend if the models have their way. Don’t expect any accumulations just yet though as the ground is still quite warm from all of our mild days recently. Thank goodness! 🙂 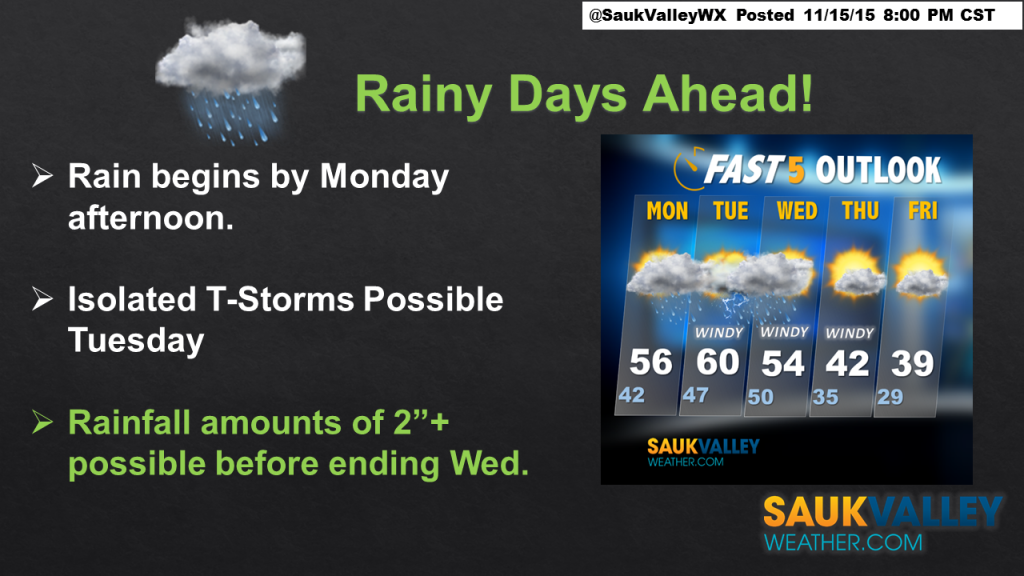