An excessive heat watch is in effect beginning Thursday morning through Friday evening as temperatures will soar well into the 90s and heat index values into the 100s. Before that though we have one more chance for showers and storms late tonight into Wednesday. Full details in today’s episode of Sauk Valley Weather Today. Make it a great Tuesday!

A much more tranquil day across the Sauk Valley yesterday compared to Sunday when many of you were bolted out of bed by the tornado warning across the area. No confirmed tornadoes on the Illinois side of the river were found however to the west of the river a total of four tornadoes touched down causing some damage with the strongest rated an EF-2. We’ll have a chance for storms late tonight and early Wednesday before the heat surges by Thursday and Friday.

A stationary boundary has been sitting to the south of the area over the last 24 hours and it has been responsible for the periodic shower and thunderstorms roaming here and there. This stationary front will begin moving to the north as a warm front by later today and tonight and will be the focal point for more showers and thunderstorms as we head into Wednesday. Right now the severe threat looks low however this may change depending on how the dynamics of the system come together. We’ll be monitoring that closely.

Heat headlines have already be issued for the area as an Excessive Heat Watch is now in place beginning Thursday morning and lasting through Friday afternoon. Heat index values are expected to be between 100 and 110 degrees. If you must be outdoors during this period make sure and follow some simple heat safety tips outlined below. 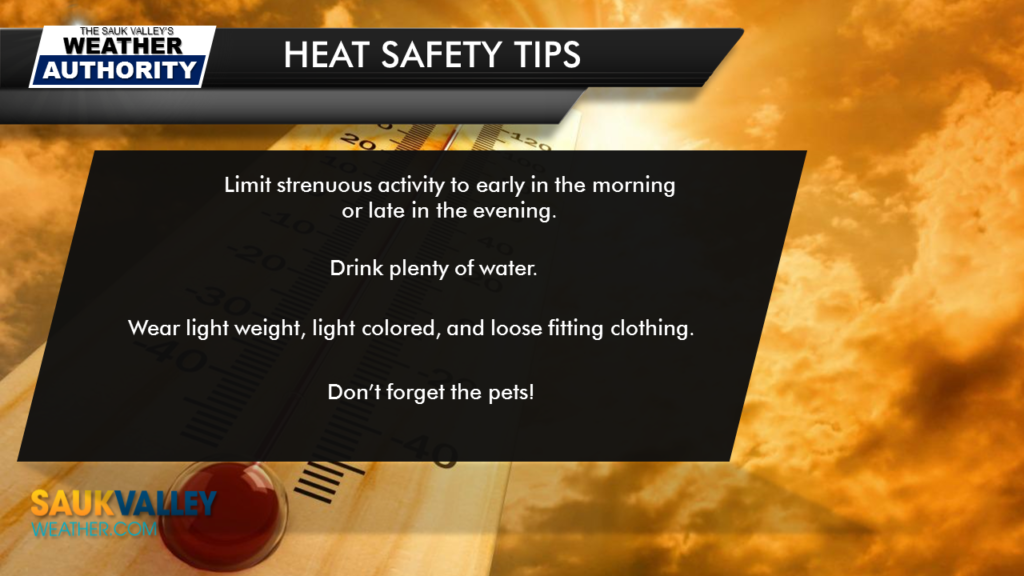 Partial sunshine is expected for today with temperatures just a degree or two higher than yesterday topping out in the middle to upper 80s.

Tonight clouds will be increasing as a thunderstorm complex is expected to develop off to the northwest entering the local area after midnight. A very mild night with lows in the lower 70s.

Wednesday features showers and thunderstorms, especially in the morning. A few storms could be strong. Highs near 90.

Thursday and Friday the heat moves in with plenty of sunshine expected and highs in the middle 90s. Heat index values between 100 and 110.