While many were sound asleep last night, slow moving thunderstorms moved through eastern Whiteside county affecting Lee county severely. Mainly between the hours of 12AM and 5AM, portions of Lee county experienced very heavy rainfall, frequent cloud to ground lightning, and flooding.

However, not all of Lee county experienced flooding and heavy rainfall. Mainly the northwest portion of Lee county was affected, with the most rainfall amounts recorded in and around Dixon.

With that, Lee County Emergency Management closed Lowell Park road in Dixon due to the roadway being flooded. Earlier, water was rushing over Palmyra road just off of Route 2 which has receded by now. A motorist had to be rescued in Dixon last night for driving across a flooded roadway with rapidly moving water estimated to be near 2 feet in depth. The Monroe avenue area seen major flooding as well with rapidly flowing water. Some homes were flooded in Dixon as well in the Monroe area as water was over the roadway. Everett St and Peoria Ave was flooded as well earlier.

A large drop off with rain totals across the area really shows the overnight rain scenario very clearly. The following rain totals are unofficial and from CoCoRaHS members. 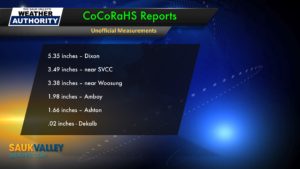 A large portions of the rain occurred in northwest and western Lee county as storms weakened and reduced rainfall rates before reaching Ashton, and eventually concluding before Dekalb as seen in the graphic above.

The Flash Flood Warning continues until 9:15AM for Southwestern Ogle and most of Lee county. Remember, do not drive through flooded roadways. Turn Around Don’t Drown.

Today’s forecast will dry up for the rest of the day. Highs expected around 86 with humid and muggy conditions. Mostly sunny skies expected. Tonight’s low near 70 and partly cloudy.