The National Weather Service in the Quad Cities has released the first spring flood outlook of the year, which calls for an above-normal risk for flooding on the Rock River, especially southwest of Sterling/Rock Falls.

Water covers the road as flooding from the Rock River closes IL-78 on February 25, 2019

Hydrologists and meteorologists look at a number of factors when issuing flood outlooks, including the amount of snow, current frost depth, and long-range forecast outlooks.

Jessica Brooks, the Service Hydrologist with the National Weather Service in the Quad Cities, says the Mississippi River has a near to slightly above-normal risk for flooding this spring, but the higher risk for flooding will remain along local rivers, like the Rock River.

Compared to last year, the snow depth to the north of our region remains below normal. Our region currently has the higher snow depth throughout the entire region.

Thanks to the deeper snowpack, frost depths have remained shallow, meaning the ground will be able to absorb water once we see our spring thaw. Soil moisture levels remain near to below normal, meaning we will have a storage capacity of snowmelt and some additional spring rainfall.

Since the bitterly cold temperatures have arrived, a significant amount of ice has built up on the Rock River, which will likely lead to some ice jam action once the ice breakup begins as temperatures warm heading into March. 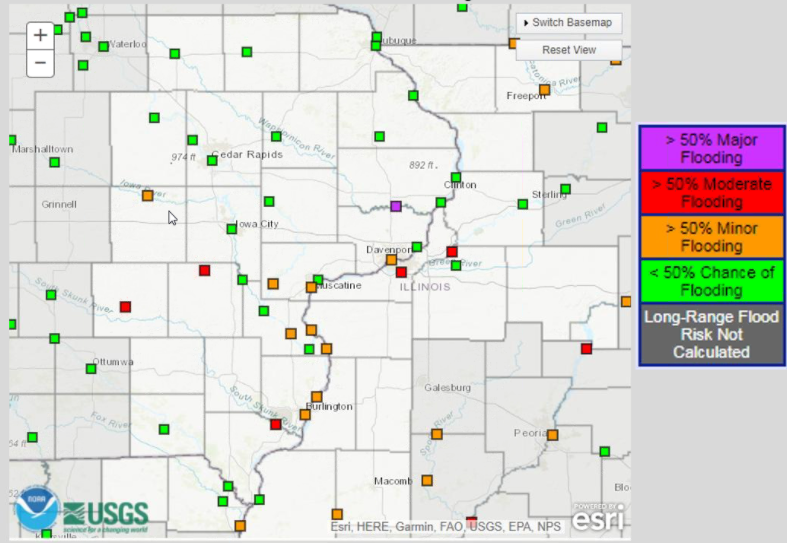 Long-range trends continue to suggest that we will see above-normal precipitation heading through April, which could further increase the threat of flooding locally.

The next Spring Flood Outlook will be released by the National Weather Service on Thursday, February 25, 2021.