Good Monday morning everyone! Yesterday’s heavy rainfall across the area continues to build on top of an already unusually wet August as copious amounts of moisture continues to stream across the region. Looking at the Doppler estimated rainfall from yesterday most areas across central parts of Whiteside and Lee county picked up nearly 2 more inches of rainfall, some of which fell in a very short period of time causing flash flooding issues.

Today’s setup will be nearly identical to yesterday. The afternoon heating will provide enough instability and lift to focus scattered areas of showers and thunderstorms, some of which will likely produce very heavy rainfall. One of the many factors that meteorologists look at when determining heavy rainfall is the magnitude of the precipitable water in the atmosphere. Here is a brief explainer on what exactly this value is and how it affects precipitation totals.

This value will remain unusually high over the area again today so any thunderstorms that form will be capable of putting down more heavy rainfall. Another feature that is aiding in the heavy rainfall is the fact that storms are barely moving. Winds remain light aloft so there is nothing to “push” these storms along. They simply develop, reach maximum strength, and then dissipate over essentially the same area.

Highs this afternoon will top out in the middle 80s with plenty of humidity remaining in place. Heat index values in the 90s are likely. 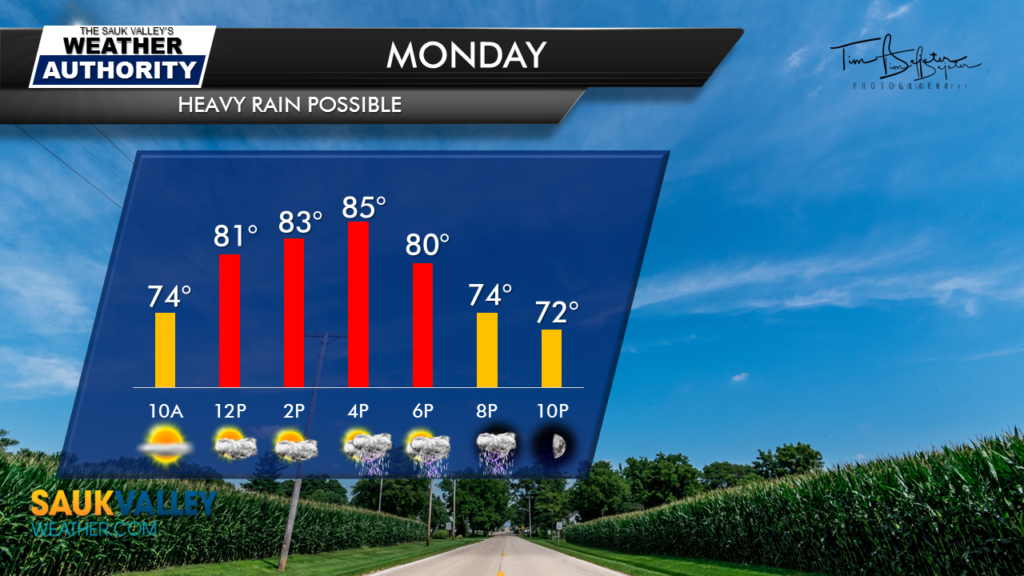 I’ll have your full forecast as well as some of your photos and videos from Sunday night’s flash flooding tomorrow morning on Sauk Valley Weather Today.