The Moon and Saturn will share the same right ascension at this time. The pair will be visible in the morning sky, becoming accessible around 1:05AM, and reach the highest point in the sky at 4:44AM, 25 degrees above the southern horizon. Around 5:28AM, they will be lost to dawn twilight. This will not be visible in the same field of view using telescopes or binoculars, but will be visible to the naked eye. 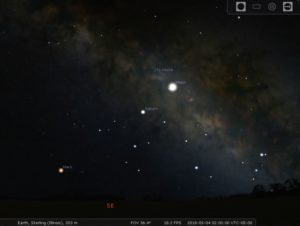 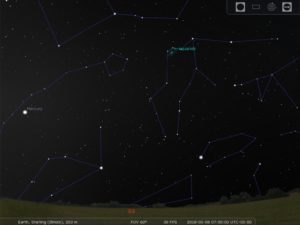 The Moon and Mars will make a close approach, nearing each other. The pair will be visible by the naked eye or binoculars after 1:15AM, and last until dawn breaks as visibility will fade. The maximum altitude of this event will be 24 degrees above the southern horizon.

May 9th – Jupiter at opposition [All night, best after Midnight] 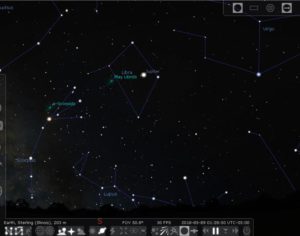 The globular cluster M5 (NGC 5904) in Serpens will be well places for observing. It will reach its highest point in the sky around midnight. Magnitude of 6.0 causing it to be quite faint, binoculars or a small telescope will be needed.

With the New Moon approaching and passing, this will be the best time frame the moon will not be the brightest for viewing the Milky Way. Also this is best time to begin viewing the big “C” in the Milky Way also known as the Core. Times to view will still remain the best after midnight.

The Moon and M44 will make a close approach of each other. The moon will be 5 days old at this time. The pair will become visible around 8:32PM, 48 degrees above the western horizon. This will be observed in the constellation of Cancer. The best way to view this will be with a pair of binoculars. 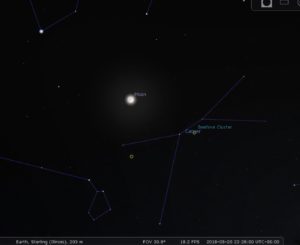 At 9:21AM the Moon will reach full phase. This Moon is typically named the Flower Moon.