9:37PM UPDATE: The tornado watch has been canceled.

9:00PM UPDATE:
The severe weather threat is quickly diminishing over the area. Heavy rainfall remains likely with any storms that move over the area.

5:30PM UPDATE:
The National Weather Service has issued a tornado WATCH for Lee and Whiteside counties until 1am Sunday.

The going forecast remains unchanged. The highest risk for organized severe weather currently remains to our immediate south. Some scattered to isolated stronger storm activity is still possible, after 6pm.

11:40AM
SLIGHT RISK FOR SEVERE STORMS THIS AFTERNOON

The latest outlook from the Storm Prediction Center has now moved the enhanced risk area just to our south. There is some uncertainty regarding how the current area of showers and thunderstorms will impact the ability of a northward retreating warm front to reach the area. At this time more instability is forecast to build just to our immediate south. We are not out of the woods though as thunderstorms with the threat for a few isolated tornadoes and damaging winds will remain with us late this afternoon into the evening hours.

Timing remains unchanged with the 3-10pm timeframe most favored for some stronger storm activity. 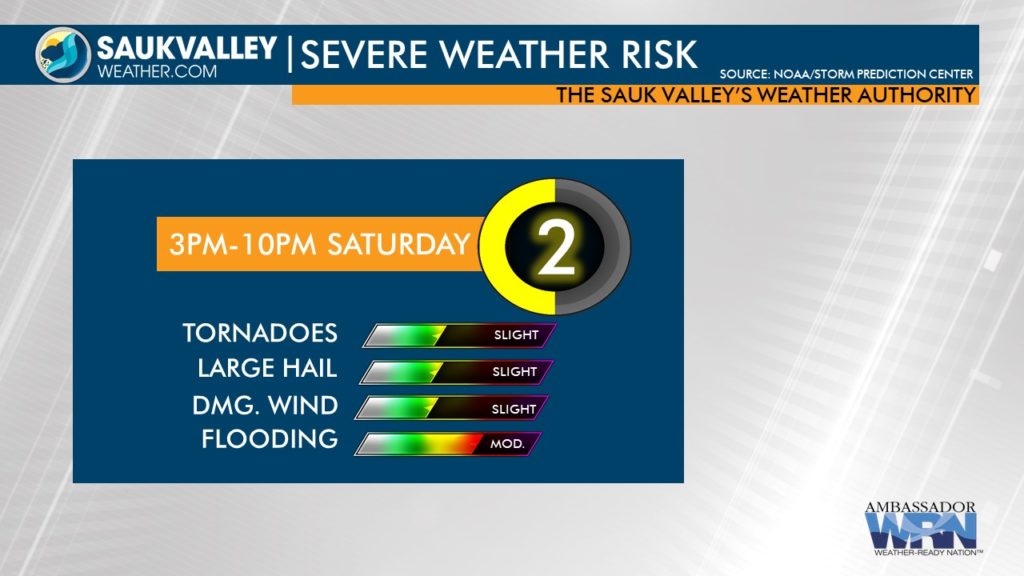 The next outlook is scheduled to be issued around 3PM.

The Storm Prediction Center has upgraded our severe risk category for this afternoon and evening to enhance. Several ingredients are coming together to possibly produce some scattered severe storms across the area as low pressure strengthens while moving into parts of Iowa later this afternoon. The combination of strong wind shear, some destabilization, and the aforementioned low is bringing some ingredients together to produce a wide range of threats.

As of 8AM the entire area has been upgraded to enhanced, meaning numerous severe storms are possible.

ALL threats are on the table for this afternoon with a particular emphasis on damaging winds in excess of 80 MPH and torrential rainfall. An unusually high level of moisture will be present over the region today allowing for significant rainfall accumulations in any of these thunderstorms throughout the entire day.

We are likely to see a few rounds of storms, one being the current round across portions of Lee County this morning, with another round likely impacting much of the area around the noon hour, which is now organizing in southeastern Iowa.

The third round, likely to develop just to the west or nearly overtop of us, will be the strongest and the severity will depend on the amount of destabilization we receive. Any storm that can remain discrete will likely carry with it a higher tornadic potential along with large hail.