We had a fantastic weekend weather-wise with lighter winds and mainly sunny skies paired with temperatures in the 70s. I don’t think it gets any better than this for the end of April!

This week we’ll be talking about a more active weather pattern as a few storm systems look to impact the area, the first one being late Tuesday.

For today we’ll enjoy mostly sunny skies and another warm day with highs back in the 70s. Winds will begin to pick up this afternoon around 15 MPH out of the southeast. Still a great day to get outside. 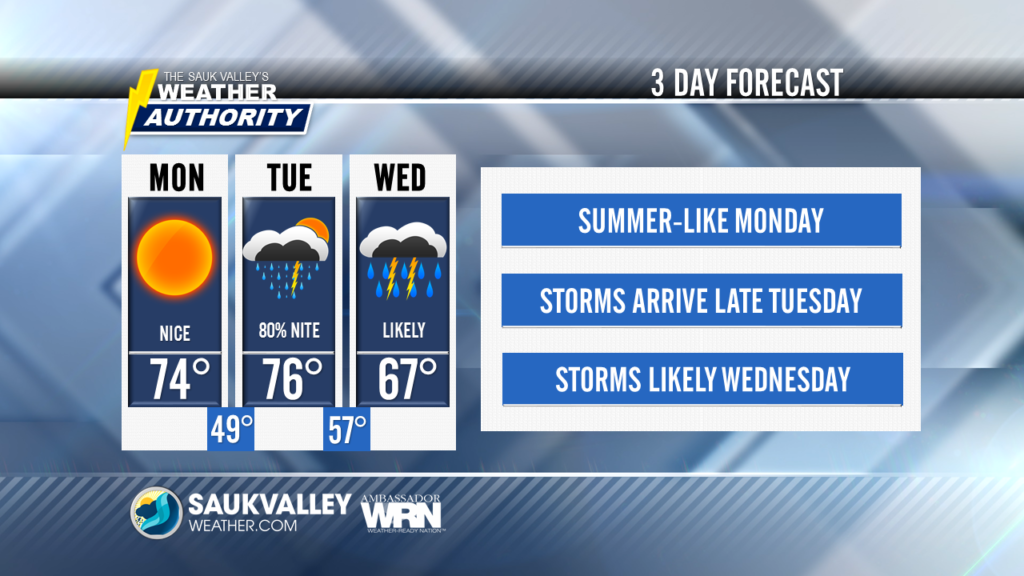 By Tuesday most of the daylight hours will remain dry before an area of low pressure approaches late Tuesday evening into the overnight hours. Tuesday afternoon will be another warm one with partly sunny skies and highs in the middle 70s likely. Tuesday night scattered showers and thunderstorms will develop around midnight and continue through much of the day Wednesday. At this time no severe weather is expected.

Of more concern is the heavy rainfall potential which looms for the end of the week into next weekend. With an active storm track overhead and copious amounts of moisture funneling into the area from the Gulf of Mexico, several inches of rainfall appear possible over a good chunk of the Midwest by the end of the weekend. Some models have been pushing out total rainfall accumulation numbers of 4 to 6 inches. While these amounts will likely change, the signal is there for heavy rainfall as we finish off the end of this week. Something you’ll want to pay extra attention to if you live along the river or a flood prone area.

We’ll have more updates throughout the week regarding the heavy rainfall potential. Until then enjoy the nice couple of days we have left for this week!