We’re enjoying a quieter pattern, albeit temporarily as a more active storm track looks to setup again right over the area in the coming days bringing not only chances for more heavy rainfall but also some severe weather, too.

A beautiful end to our Easter holiday weekend will continue right on into today with mainly sunny skies and lights winds expected making for ideal conditions for anything outdoors. Highs will be back in the lower 70s. Monday evening will remain quiet with partly cloudy skies and lows in the middle 40s. 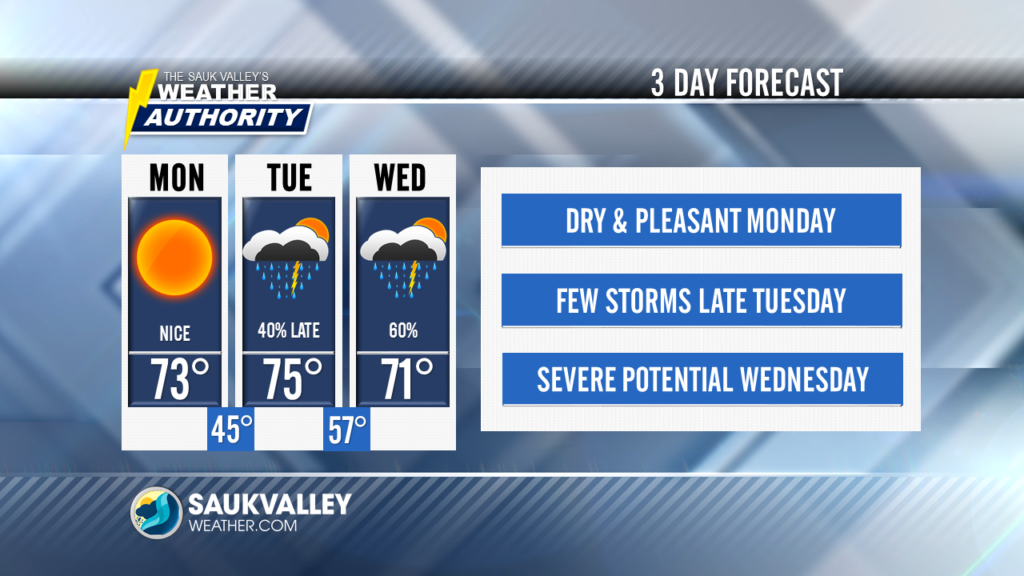 Beginning Tuesday a front will begin to approach the area bringing with it an increase in clouds by the afternoon and the chance for a few scattered thunderstorms. Highs will remain mild with a gusty south wind around 20 MPH pushing highs into the middle 70s. At this time no severe weather is anticipated for Tuesday.

Wednesday looks to be the more active day around the area in terms of severe weather and heavy rainfall potential.

A stationary front will transition to a warm front with a very large temperature gradient sitting either over the area or just to the south. Showers and thunderstorms are likely to be ongoing over much of the area by Wednesday morning. If these showers and storms can clear the area by late morning, allowing for some sunshine and destabilization through parts of Wednesday afternoon, then our risk for severe weather increases with all hazards of severe threats possible including large hail, damaging winds, and tornadoes with storms that develop Wednesday afternoon and evening. The placement of the warm front in proximity to our local area will be crucial as to where the greatest risk for severe storms will be. Currently forecast models have the front very close to the area by Wednesday afternoon. There are still several wild cards at play in this forecast and the details will become more clear as we go through the next 24 hours. Make sure and pay attention to later forecasts as this threat is clarified.

The Storm Prediction Center has already placed the majority of the area under a Slight Risk for severe weather on Wednesday afternoon and evening.

Heavy rainfall will also likely accompany this active pattern as high moisture levels are brought into the area. At least an inch of rainfall will be possible with higher amounts in areas that see the stronger storms. More rainfall is expected for the second half of the week and that time frame also holds the potential for more heavy rainfall.

Bottom line: Another active week ahead with the potential for heavy rainfall and severe storms. Keep tabs on the forecast as we head through the coming days.